To create a multiple world, you need lightness 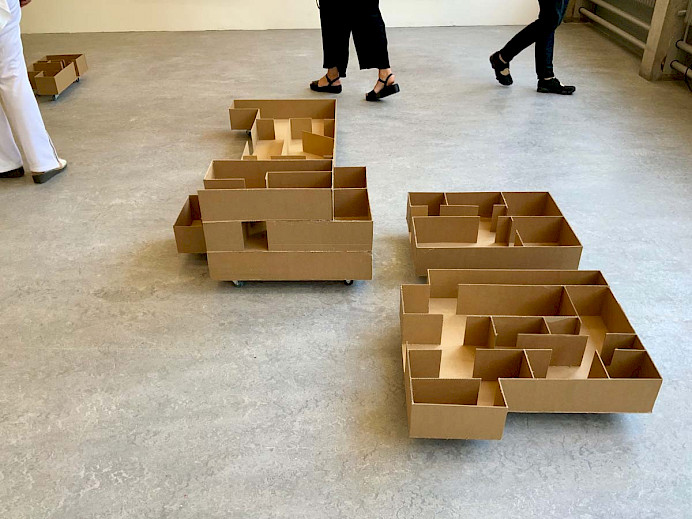 I come each year to see the Rietveld Graduation show because I’m always curious to understand how the next generation of artists deals with the world. The Gerrit Rietveld Academie is an art educational anomaly in the Netherlands. In the last decade it took to internationalisation so well that it managed to tip the ratio of foreign and national students in favour of the foreigners, with a range of as far as 68 nationalities and counting. The Rietveld is an open space, it represents a large part of the world, though not all.

I walk across the campus, aware of its multiplicity. Inside the old Rietveld building, in a darkened and crooked room, a two channel video plays on in a loop. Shots of old forests, an empty road, a concrete structure surfaces on video - modernist, monumental and unfinished, abandoned and eaten away by time and nature. It´s not a coincidence that the Rietveld itself was built according to modernist standards. A young woman´s back comes in focus. She enters the space and starts pushing against the walls with both hands and the strength of her entire body. Another girl follows, and another, and another. They’re in total around 120 found by the young Austrian-Kosovan artist Stephanie Rizaj on the border of Albania and Montenegro. Each push of theirs imagines a new world and dismantles the aspirations of the old one. The young women in the video keep pushing even as I walk away. They’ll keep pushing for days.

In the room next to Stephanie´s work, Diego Diez´s maquettes occupy the floor. Diego is Spanish. His work “Dear Spaces”, moves and shows an applied way out of modernism, a way of working collaboratively, his walls not only seem but are lighter and easier to dislocate. His maquettes are in fact moved each day by various artists which Diego invited over to help: Gabriele Adomaityte, Gabriel Lester, Tirza Kater, Kevin Bray, Nick Terra and Eloise Sweetman. The maquettes are of buildings which are important to Diez, spaces remade from memory in dialogue with acquaintances and family (galleries, museums, homes). These scaled down spaces change position, they travel on wheels. They make us remember movement is possible, but just as Rizaj´s work, they remind of the fact that movement needs to be done collectively. 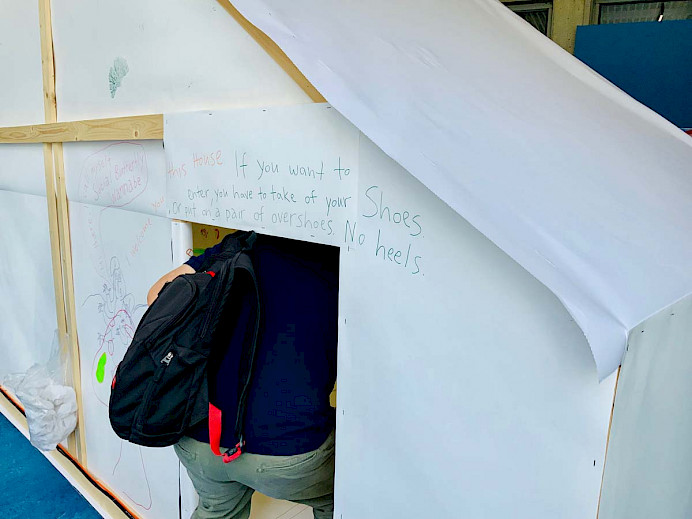 Only The Sun Comes Up For Free, Pinocchio (2019), Boyan Montero

To imagine a new world one has to think of the basics. Shelter, nurture, humour, the self. What do we build once we are done with dismantling the old walls and the old preconceptions? We step into softness and the unknown, we make the self malleable and can curl up in Boyan Montero´s structure which resembles a home, on the outer side white paper, on the inside regurgitating slices of fantasy and talking about the concept of the gift through the language of Drunken Love, Self-Centered Gods, Thirsty Vampires and Snow White. Montero, of Mexican and Bulgarian descent and having grown up in China, seems to be the embodiment of what comes when you give up on the idea that one needs to have a singular narrative. His story overflows and bubbles to the surface and talks of the ambiguity of living in these times.

I discover the best weapon is lightness on top of resistance, moving on top of the concrete of old. I feel this lightness, to the point of becoming unhinged. There’s fear that all that we’ve built can easily drift away, all the heavy and reliable structures, all that we used to believe in. I wonder though what would happen if we just took our malleability seriously and allowed ourselves to simply flow. What if identities would be possible to be built up and stored away fondly? Would this be a way to do something about the current pressures we are submitted to? If everyone ever so gently allowed their selves to move, to become another, to become multiple, would this in any way help? 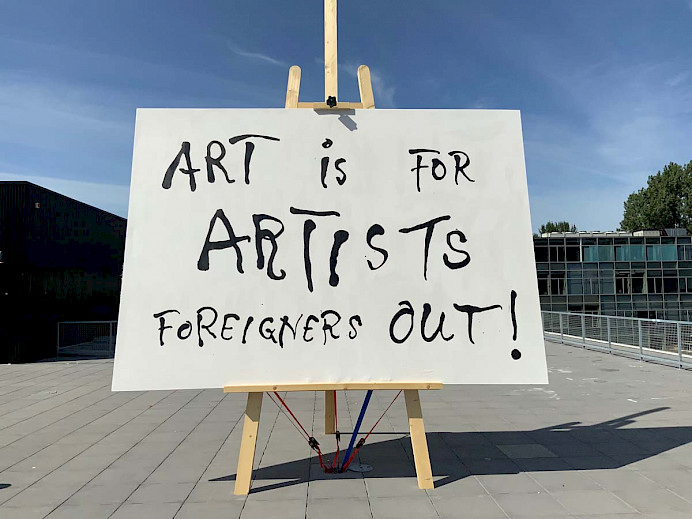 “Art is for artists. Foreigners out.” A canvas twice my size with this text in black font bids me farewell as I exit the Gerrit Rietveld Academie campus. The piece is called “Hand job, (maquette for sculpture to go atop of the great Ivory Tower)" by Danish fine arts graduate Jo Hedegaard and it stands in stark contrast to what the Rietveld is.
Is it a sign of the times? Is it a sign of resistance?
I leave without knowing.