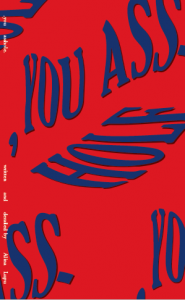 Printed at: Pantheon Drukkers, Velsen-Noord, The Netherlands, in an edition of 200 copies.

“An intelligent and literarily written account of ‘the art of assholedom’, shining light on all-encompassing and ruthless art as/is life as represented in the acts of Kippenberger, Lee Lozano, Andy Warhol.”
— the northern committee

“Truly unapologetic assholery of which (and because) the ‘what’ and the ‘how’ and the ‘why’ remain hard to grasp – leaving those who try with nothing but a blank stare: why accelerate on a dead end street? Is there a way out - a secret, or a lie? But told by the beholder it still remains a bitter fairytale.”
— substantial times

“So there is a moral after all, despite the critique of art world mechanism that is convoluted and captivating with a discernible joy for provocation."
— amsterdam tribune

“A voice that we can’t help but think is yet too cautious to actually touch upon the unknown knowns.”
— the moral observer book review 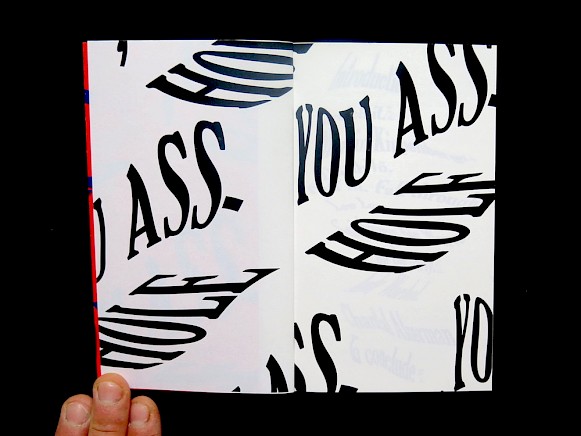 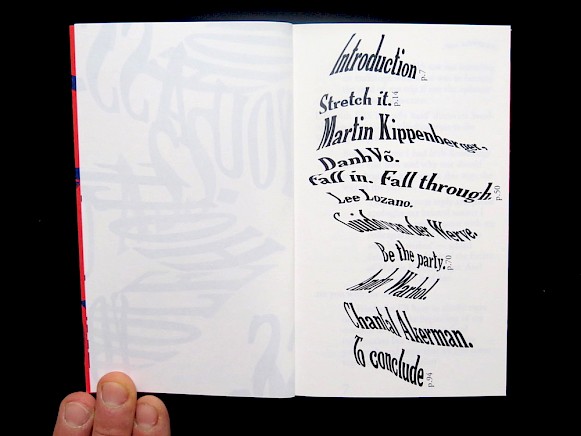 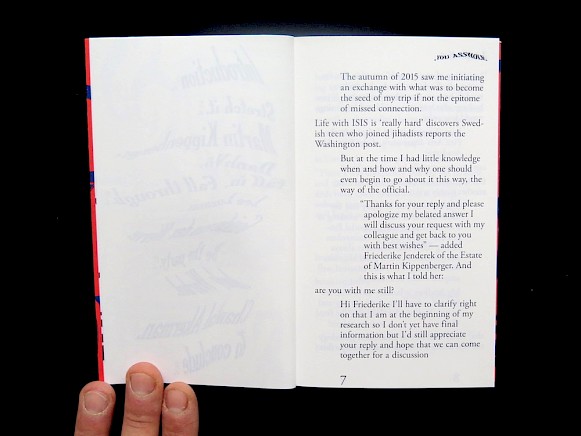 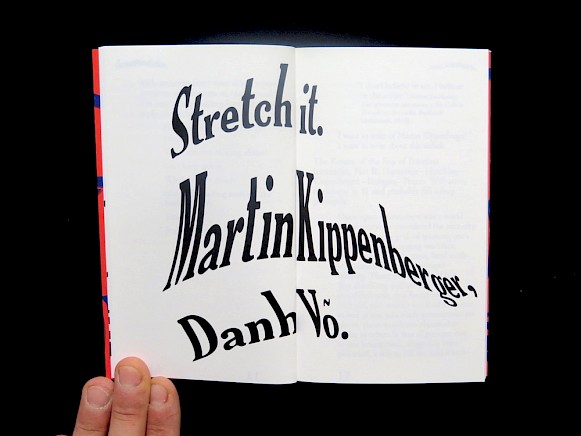 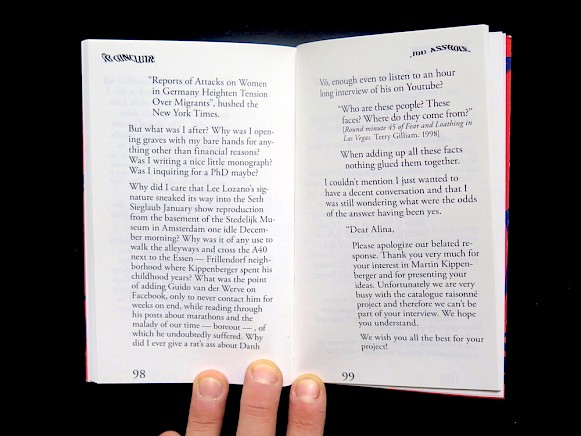 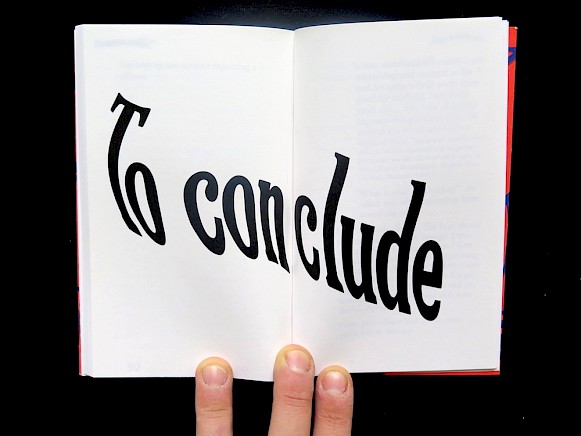 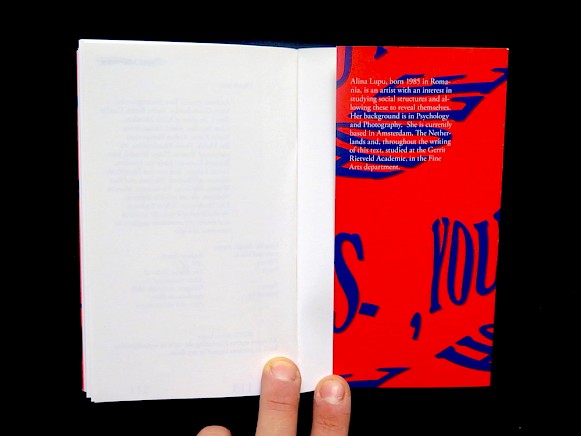 ‘A manifesto for an artist as mild provocateur’

(Notes on the publication “You Asshole”, by Alina Lupu)

“You Asshole” is an essay that explores artistic personalities that fall outside the pattern of the art world. In three different chapters, Alina Lupu aims to address various ways of engaging with the marginal, from the standpoint, also by embodying the artists on which she attempts to touch with her writing, by using their methods and appropriating their projects on a much smaller scale. One could read this essay as a manifesto of a young artist, at the moment of completing her artistic education and making her first steps outside an institutional framework, employed in her most recent work: ‘Visit Condition’, 2016 (visible mobile surveillance system, sound piece and four museum guards on daily shifts).

“Stretch it: Martin Kippenberger, Danh Vo” is the title of the first chapter and it deals with the notions of fitting in and being right on the edge. It does not matter how you get somewhere, according to Alina Lupu. Text follows numbers, while fragments of news reports, interviews or memories – fabricated or not- intersect each other on almost every page. Art and politics are a lead, a clue in getting closer to Kippenberger via Joseph Beuys and America. There is a vigorously back and for movement, from waiting on a train platform, to the S-bahn, to the bus, to the airport and back on the bus.

This is a clever engagement between performance and documentation: the manner in which she digresses from one topic to next, from written documentation – emails or quotes- to talking in the first person. This chapter represents the introduction of the concept of America, understood as the utopia, the dream: ‘we all want to go to America, but America is no longer there’. While Martin Kippenberger represents the ‘then,’ Danh Vo is mirroring the ‘now’. The artist Alina Lupu argues that, when letting all strands loose, no coherence, just mix and matching ideas, an amalgamation of mediums and materials, art looses its potentiality. If all is possible, if there are no boundaries and no messages to convey, then there is ‘no surprise’ and apathy will take control over us. Viewed in this context, the artist is merely a mild provocateur.

Second chapter “Fall in. Fall through. Lee Lozano. Guido van der Werve” makes a return to America. Lozano has reached it before both Beuys and Kippenberger, and yet how does this tease the notions of ‘then’ and ‘now’?

Lee Lozano’s conceptual art in relation to enactment represents another interesting aspects for Lupu’s artistic practice: she escaped the world around her, not only the art world, avoiding it or maybe, as Lupu puts it “actively curating her position” and anticipating her escape. Guido van der Werve makes his briefly appearance through the lines of this text, only introduced by a phone call conversation. The main method of writing used in this chapter is overlapping artistic theory and criticism with personal interventions. And by this I mean, the intensity of switching from the third person to the first, coordinating and directing words to act as intermezzos.

The third chapter: “Be the party. Andy Warhol. Chantal Akerman” opens up with the image of the ‘soup can’. As the title points out, the main character is Andy Warhol. According to Alina Lupu, we are not interested in life, we need to escape it: just like Lee Lozano did. In the world of ‘now’, we have alternatives, one of them being ‘new sincerity’. Can one talk about a previous sincerity, the one of ‘then’ facing the one of ‘now’? In other words, sincerity is facing itself, in a similar manner as Warhol was reflecting his time- his life being his art. The concepts of choice and chance introduce the presence of Chantal Akerman. The mirror appears as a leitmotif: pendulously moving from analysing to reflecting and her work can be seen as the ‘overbearing presence’ that would, eventually, make you- the partner of this dialogue- to ‘beg for a mirror’.

“To conclude” turns the reader toward the self- analysis of the artist-writer. ‘What is your motivation?’ is a leitmotif that functions both as barrier and as foundation. What do the facts and observations presented here, tell us?

‘To know or assume knowing’ might give an answer to this endeavour, on the other hand Lupu’s answer is: ‘I don’t know’. She is looking for an answer, concluded that she could not find one that would bring her closer to clarity. Yet, the reader will find her quest intriguing and passionate, digressing at times, but bold and affirming. This essay is a collage of thoughts and dreams meant to enhance coherence, and even if it does not share light on the matter of clarity, one might conclude that “[…] there are things we know we know […]”