On May 13th, students of the Piet Zwart Institute in Rotterdam put up a self-made banner in support of the victims at Sheikh Jarrah in Palestine on the side of the PZI building.

The banner proclaimed the following: 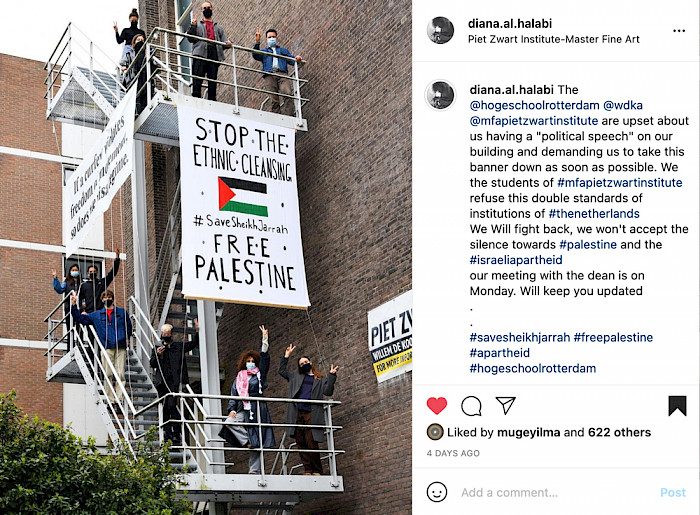 Image of the banner posted by the students of PZI, Rotterdam, made public by Diana al Halabi on her personal IG

By May 17th, the banner was taken down.

The institution called the students over for a conversation and released a statement to justify the school’s stance — political neutrality.

STATEMENT // reaction to student banner due to situation Palestine and Israel

We are all closely monitoring the current situation of the Middle East between Israel and Palestine. A situation that can only lead to loss. We understand that it is a worrying situation for all involved. One that has a great impact on the people there and on their families and friends here in the Netherlands who are worried about the situation.

A number of students have expressed this concern by displaying a banner on one of our buildings. We have removed this banner because we as a University of Applied Sciences we do not get involved in geopolitical situations and our buildings should not be used to this end. We are willing to engage in dialogue, to facilitate the dialogue between groups of students and staff with different allegiances, but our long-held principle has been that we do not take political stands, whether on national or international issues.

We want to provide a safe learning and working environment for all students and staff, regardless of their background. What may be an expression of genuine concern to one person can be perceived as threatening by another. We aim for our students to become empowered professionals with their own views. We, therefore, welcome the fact that they are speaking out on the subject. But our buildings do not serve as a platform for those views. Above all, we call for people to express their opinions respectfully and to especially do what the world sometimes fails to do, and that is to stay connected.”

In the meantime, that online statement has been rightfully plundered — more than 300 comments criticizing it have gathered on that post, on an otherwise uneventful social media account that numbers 2–3 comments on a good day.

With the assistance of social media archeology, the students have pointed out the hypocrisy of stating neutrality in regards to the ethnic cleansing of Palestine, while preaching “freedom of speech” in cases like the Charlie Hebdo massacre, in making empty statements in the form of a black square in support of the Black Lives Matter movement, or establishing, of all things, an “Office of Inclusivity”.

“One should take the official statement seriously. No authentic political stance can be expected from the institution. Politics will mainly remain at the pedagogical level, that is, both the informal level of conversations and discussions and the formal one of syllabi and programs. Students and teachers might be surprised by the school’s authoritarian decision, but the school shouldn’t be surprised by their reaction. A double bind is in place: in several academies, the educational level prizes the political to the extent that nothing can escape it; while the managerial level is blind to it, or even actively against it when it goes beyond “content”, that is, when it is truly political.”

Since the back and forth at PZI, some institutions have followed suit in making public statements in support of the people of Palestine.

And the list of institutional names slowly trickles in, reluctantly, as social media feeds are framed by images of atrocities mixed with announcements of exhibition openings, notices of divestment, walks in the park, artworks being made, products being sold, folks taking their ADHD meds, laughter and sadness, and glorified complexity, while silences of friends on the topic end up being the loudest among all posts, and some have even gotten to justifying why they're not posting anything in posts as long or even longer than would have been necessary to state support.

Meanwhile, other institutions, while framing long winding platitudes on their building — such as: “art is the mother of resistance”, a work by Alicia Framis which graces the facade of ArtEZ in Arnhem — remain otherwise silent in spite of the loud calls of their students and staff. 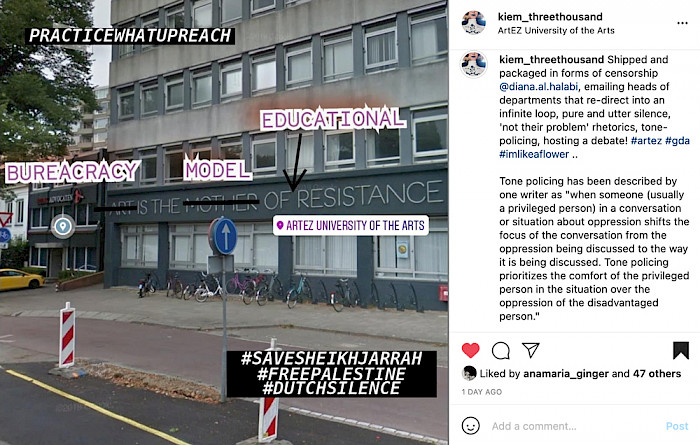 I guess it’s safe to say, in the case where statements have gone missing or advocate neutrality after teaching decolonial theory, that your institution isn’t woke, it’s just instrumentalizing you for street cred. It’s taking your hopes, your dreams, your aspirations, your country of origin as a marker for international reach, tolerance, and openness. And this used to be fine up until recently, up until spines started growing left and right within the art field. This used to be a symbiotic relationship. I scratch your back, you scratch mine. I give you my support, you give me yours.

But let's not make it political.

You take my image, you bend it and fold it and turn me into a worthy product. I might get to earn because of you, or I might not, since the art and design field are flimsy and few make it to monetize their practices, nevertheless art educational institutions keep on churning diplomas in spite of it all, in spite of a pandemic, like clockwork, on time, right on the money.

But at the moment the very thing that worked — the mutuality of this relationship — has broken down due to the fact that a new generation is discovering its political affiliations, or, rather than discovering them, making them more public. And that’s where institutional structures drew the line and started advocating neutrality.

It is a mark of solid education — so the teaching quality exists — when, in spite of the institutional framework, in spite of spinelessness, one grows a sturdy stance and decides to stand up for ethical treatment and having a political voice.

So, where to from here?

On May 19th the representatives of the students of Sandberg Institute's Disarming Design Master were invited to make a public statement during a series of lectures streamed live on Youtube and entitled Kaleidoscope. Their statement was uncensored/unfiltered/they had an open stage. This showed, though on a smaller scale, some potential institutional openness. The statement ended with:

“Palestine will be free and now it’s the time for you to decide which side of history you would like to be on.”

And was followed by calling out the institution for its perfect willingness to instrumentalize the identities of students coming from former colonial territories — the Disarming Design Master is “a two-year Master program at the Sandberg Instituut in Amsterdam committed to designing practices that deal with conditions of conflict, oppressive forces and entangled histories”, and its students relate to their lived experiences throughout their studies — while at the same time the inability of the institution to issue a public statement on the ongoing ethnic cleansing of the Palestinian people.

In spite of the students asking on an open online stage, there was no instant materializing of general institutional accountability. But when faced with the sincerity of the demand, the institution laid itself bare as what it is, a neoliberal instrument which can be used to further one's career but isn’t a real community, with ties that bind, but merely a casual, temporary, colorful, accumulation of individualities.

A Thatcher quote is, at this moment in this text, the only fitting way to frame this:

“They are casting their problems at society. And, you know, there’s no such thing as society. There are individual men and women and there are families. And no government can do anything except through people, and people must look after themselves first. It is our duty to look after ourselves and then, also, to look after our neighbours.” —Margaret Thatcher, in an interview in Women’s Own in 1987

The creep of neoliberalism has liberated what appears, from the outside, and even is sometimes assumed from the inside, as a unified institution from its own moral backbone, if it ever had one. What followed as responses were a series of individual statements from Daniel van der Velde and Flavia Dzodan, the tutors leading the discussion and offering the platform. 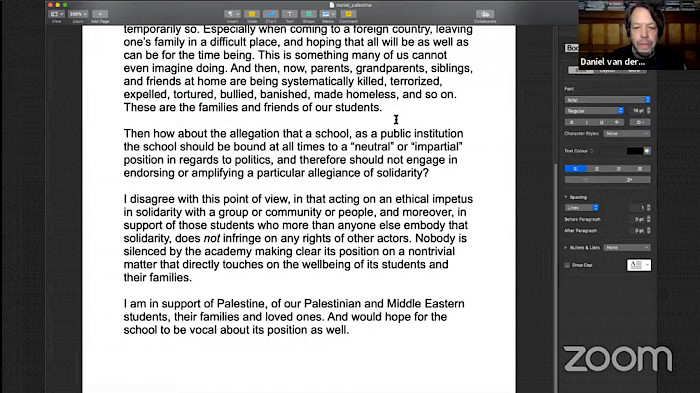 Daniel van der Velde's (Metaheaven) statement in solidarity with the Palestinian cause during Kaleidoscope 3, at Sandberg Institute

Both of them felt emotionally attached to the cause and supported their students and made personal statements in support. 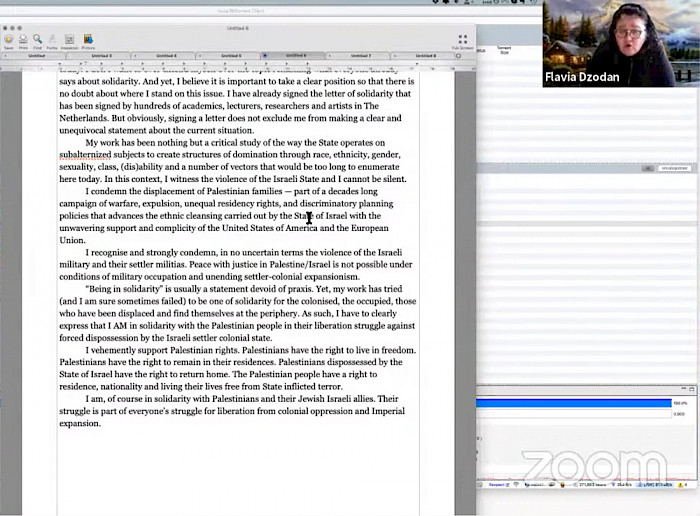 Flavia Dzodan’s statement in solidarity with the Palestinian cause during Kaleidoscope 3, at Sandberg Institute

But they also made clear why a true institutional statement is never really possible in an institution like the Sandberg — it basically boils down to the fact that “there is no society”. Sandberg Institute is not a unified institution, but a collection of freelance tutors that mostly work 2 hours a week and don’t even know their fellow tutors. Organizing, under this framework, would be a monumental task. Not impossible, mind you, but for sure time-consuming.

Collective organizing among freelancers becomes then the ball and chain of why things are not moving.

The outwardly projected image of the institution is very appealing, but its internal material conditions are actively working against solidarity and are fully embedded in a neoliberal framework. Within that framework, one can have progressive programs like “Disarming design”. But in practice this is ultimately a form of colonization of artists with a background that is deemed different from those coming from the global north, a type of background that needs to be “included” for “diversity” reasons, that needs to mine its own suffering over and over— at once reliving trauma and neutralizing it.

Ultimately, the students present in the talk ended up being in solidarity with their teachers, because solidarity is the only way to move forward, but they perfectly understood how they were being instrumentalized by the institution.

And then, at the very end of the lecture, "the institution" itself made an appearance. Gatecrashing the conversation, the director of Sandberg Institute, Jürgen Bey, felt the need to make his voice heard and to affirm, as in the case of the PZI/WdKA statement, Sandberg Institute’s political neutrality.

The director of the Sandberg Institute, Jürgen Bey, gatecrashing the Kaleidoscope 3 lecture

I’d like to say that you can follow these exchanges online, but this particular Kaleidoscope lecture is unlisted. The initial title of the lecture, still listed on the Institute's website, seems fitting:

Even if no longer public, in its brief opening up of conversation, in the brave stance of the teachers and the abrupt stance of the face of the institution, it's clear that a rupture has taken place which needs to be carried forward.

Yes, neoliberal conditions, exhaustion, precarity, don’t allow for organizing in a traditional sense, but this is why new ways need to be thought of, now rather than later. It’s not just an art educational institution’s face that’s at stake, but the future of solidarity.